Professor Sheri Markose of the Economics Department of the University who is well known as
a pioneer of complexity economics and the use of financial network models for macro-prudential
policy, is pictured here at the OECD with Angel Gurría, Secretary-General of the OECD and also leading economist, Alan Kirman, and the econo-physicist, Doyne Farmer.

The OECD has launched a forum for New Approaches to Economic Challenges to try and
counter group think among OECD economists and also their adherence to mainstream
macroeconomic models which were found to be mostly irrelevant for the problems thrown up by the 2007 crisis and Great Recession. 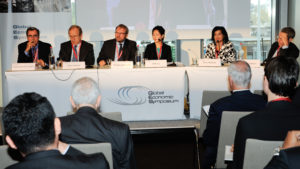